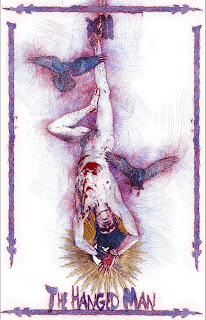 Why do I call my studio, Hanged Man Studio?

Hanged man does not refer to the spelling game played by children, nor does it refer an executioner. Rather, it refers to the 12th card of the Major Arcana of the tarot deck--The Hanged man. I am not a believer in the mystic or predictive properties of the tarot. I do, however, love great stories and myths, symbols and the cards of the tarot represent a great wealth of these. My interest in the card goes to its origins and connections with Odin, the all father of Norse mythology. In the elder Edda (the source of much Norse mythology) there is poem of Odin quest for knowledge in the land of the dead:


wounded I hung on the wind-swept gallows,
for nine long nights,
I was pierced by a spear,
I was an offering to Odin,
offered, myself to myself
No one has ever known
or will ever know the roots of that ancient tree
No one came to comfort me with bread
no one revived me with drink from a horn
I peered at the worlds below:
I seized the runes,
shrieking I seized them:
then fell back

This is the scene depicted in the tarot card. The gallows represents Yggdrasil, the world tree. Its root penetrating deep into the underworlds its limbs and branches supporting the heavens. Odin is the hanged man--offering himself to him self he enters the land of the dead and learns the words of power and of knowledge. The parallels to art and the creative process might be a little overblown. Especially from an guy that draws dragons for a living. But, there is something to the self sacrifice, and solitary nature of of the creative process --of reaching into unknown and unexplored areas of your mind and seizing the inspirations that hide there and wrestling them on to paper. That is the name sake of Hanged man studio.

Malcolm McClinton
Just a guy making a living from his art and imagination--I have found a nice little niche for myself that satisfies my anti- authoritarianism, reclusive nature and need for adulation all at once.